This is the bike that I bought to negotiate the back roads of North Carolina, thinking that my cruiser would'nt do it. So far it's been great for that, but as far as touring goes, it ain't gonna cut it. Very uncomfortable for any extended period of time. Damn seat like a 2x4! But at least the riding position is upright. I'd drop the "touring" off the sport touring name, though. It's a Suzuki Bandit 1200s, and it will jerk your arms out of their sockets if you are not careful. It's got a shorter wheelbase than any other bike I've had, and man, this thing will get up and go! Commonly referred to as a "hooligan" bike, because of all the young dudes popping wheelies on it. Well, I ain't no hooligan, but the maneuverability of the beast is the best of any bike I've ever had. I just take it slow and easy (mostly) and I don't do wheelies. 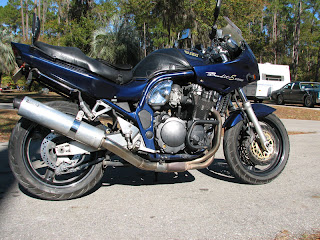 Here in Florida, most roads are flat with no mountains, so I'm hankerin' for a cruiser again!
Posted by the_Wanderer at 7:15 AM

Email ThisBlogThis!Share to TwitterShare to FacebookShare to Pinterest
Labels: Not cruisin'