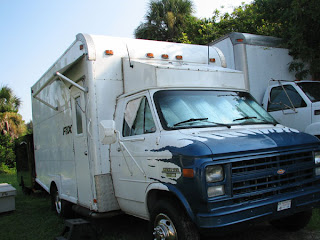 It's a 1987 chevy box truck, camper chassis, 350 engine. It's called a "cutaway" in the van jargon. I bought it in Pennsylvania after my first conversion (a short "skoolie") blew it's diesel engine. We were stuck in North Carolina for a while because of having to put a rebuilt transmission in it. Hard on the pocketbook.
With our limited income, the upgrades are coming pretty slow. Iv'e put in a couple of huge AGM 8d batteries in to supply our house power, and of course the inverter to run our electrical stuff. Pics will follow later, for those interestted in upgrading things.
Posted by the_Wanderer at 7:31 AM

Email ThisBlogThis!Share to TwitterShare to FacebookShare to Pinterest
Labels: The Rig