Well, some big changes to our lifestyle. Nah, not the lifestyle, but the way we do it. The way it started was the box truck needing another repair. Blown head gasket, or block crack. So I was gearing up for another boondocking month in Texas heat trying to accumulate the money for some mechanic to pull the head off the engine. Pulling the head off this engine is more than I am capable of.
I was looking at Deb and wondering if I could put her through all this again, with the miserable Texas heat. Also, she rarely escaped the box, and now with no way to drive it, we would have to be parked in a plug-in site to have air conditioning.
I guess the decision was made for me. The box had to go. At what cost? I had to sell my trailer and my bike. I then took that money and bought an old class C. 1987 fleetwood tioga on a chevy chassis, 350 engine. Almost the same as what I had, except I didn't build it. 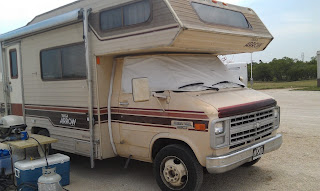 But at least it's drivable. I can take Deb out and about, and the air conditioner works. I knew that the notorious  overhead would leak. Also, it required a $900 brake job, new master cylinder and lines. I've already started repairing the roof, and the brakes are done.
During this same time period, we met and adopted another furry companion, a Lhasa Apso named Charlie. Could not pass him up (I'm a sucker for Lhasas). Ain't he cute?
So, the adventure continues, with a  few forks (thanks, Brian) in the road.... 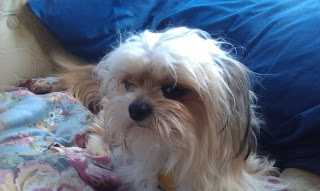